Chimpanzee photographed by Francesco Ungaro in Uganda via unspash.com.

Follow Simon Hoyte into the rainforests of Cameroon, where the researcher and his colleagues from the Zoological Society of London are working with locals to create an app that reports wildlife crime and protects endangered species. 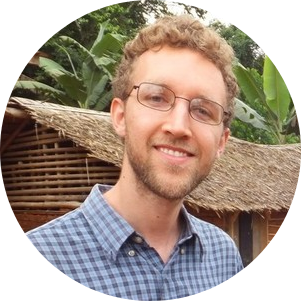 Simon Hoyte has worked and studied in the fields of zoology, anthropology and archaeology in both the UK and South Africa. His research is aimed at tying together the not-so-disparate threads of conservation, indigenous communities, and technology. Working with rainforest hunter-gatherers and farmers in Cameroon, Hoyte is helping create a community-led software for monitoring wildlife.

I recorded this near Bosso, a small village in southern Cameroon, in a rainforest that forms part of the Congo Basin – the largest rainforest after the Amazon. From the air, this region looks like an image of pristine wilderness; surprisingly, however, there are over 75 million people who actively use this forest for their survival. Of these are the indigenous BaYaka people, who are strongly bound to the spirits and gods of the forest and make use of the food, water, and medicine that it naturally offers. After the San people of the Kalahari, the BaYaka people are the most ancient human group in the world.

Despite the fact that these people have proved to live sustainably with the forest , ideas of human-free wilderness are still dominant amongst conservationists and governments. In East Africa, indigenous Masaai villages are being burnt down to provide a view of ‘pristine wilderness’ from luxury safari lodges. But the truth is that such landscapes are not, and have never been, a wilderness isolated from humans. Numerous studies reiterate how the famous Serengeti exists in its current form not in spite of, but because of the Masaai and their nomadic herding, which creates a habitable savannah for the wildlife. The BaYaka people have actively shaped the forests of Central Africa for millennia, their camps opening up the forests for new species to emerge and their digging of wild yams providing food for elephants. Protecting an area of ‘pristine wilderness’ is frequently used to justify the forced eviction of indigenous peoples, yet it is precisely the very existence of these people that make the landscape so highly prized.

Co-inhabiting the forest in Cameroon alongside forest elephants, gorillas, chimpanzees and leopards, are the Baka. One of the indigenous BaYaka groups, the Baka are hunter-gatherers who were once nomadic, but have now been forcibly placed along roadsides in order to make way for logging and mining companies, safari reserves and conservation areas for wildlife. “People who are coming are destroying the forest,” one Baka man told me, voicing his anger over how they have been stripped of access to the forest: the basis of their culture, language, and world-view. The ecological knowledge of the Baka is incredibly extensive: they are familiar with over 600 plant species (360 of which are used for medicine) and their language contains, for example, more than nineteen words for ‘gorilla’ and twenty-eight for ‘elephant’, depending on the state of the animal, their behaviour, their relationship to others and many other factors. For the Baka, there is a  connection rather than a divide between human and non-human; the term Mòkèlàkèlà (used to describe a man who has undergone transformation into an elephant) is only one amongst many examples.

Despite this, their ecological knowledge is ignored and often actively suppressed by those who have been designated to manage the forest, such as ministry officials, private companies and foreign conservation organisations, who either ‘know better’ or profit from the forest’s destruction. Many Baka communities I have spoken to are furious of their exclusion from conservation and want to be involved in managing their forest. For this reason, the Extreme Citizen Science Research Group (ExCiteS) at University College London is working to enable indigenous communities to collect and share data on issues that matter to them most.

In Cameroon, we are working with seven communities, each of whom have voiced their desire to report wildlife crime that is destroying their forest and to monitor animals they encounter. The projects are led by the village, with each village deciding what data they want to take; this can be tricky, given that Baka communities are largely non-literate and live in remote rainforest.

Together we’ve developed an innovative solution: smartphone apps made up entirely of icons decided on and designed by the villages themselves. Whether drawn in the sand or in a notebook, village teams make designs for things they would like to report and monitor using their local and indigenous knowledge, which are then digitised and added into their village-specific app. Most often, these include local animal species, local guns, poacher camps and killed animals. Symbols such as ticks, arrows and play/pause are avoided as they make no sense to local people. As part of the app, teams can take photos and audio of what they see, and a GPS point is automatically taken. My Cameroonian colleagues from the Zoological Society of London and I have trained teams in the villages to use the app on rugged smartphones, which attempt to sync data every five minutes through both mobile data and SMS, which, if successful, adds the data to an online map. All the work is led by a free, prior and informed consent process: communities’ rights, the potential benefits and risks, as well as the possibility to reject, modify, or terminate the project are stressed.

To date,  693 reports have been received from the seven villages documenting things from gun cartridges to killed chimps, ivory traffickers to elephant footprints, accompanied by  586 photos and audio clips. Urgent reports are forwarded on to ministry agents, trusted by the communities, and animal monitoring data is then forwarded to NGOs to improve conservation strategies, but only if approved by each community. Through these, the project hopes to reduce wildlife crime, increase animal numbers, incorporate the knowledge and rights of the Baka into conservation, and empower communities to play an active role in safeguarding their forest on their own terms. Despite deeply entrenched corruption amongst authorities that hinders sustainable management of the forest, we are making some progress. As one village told me: “It has reduced poaching here and it brings back wildlife near the village. We see gorilla near the village now!”

This project has received funding from the European Research Council (ERC) under the Horizon 2020 research and innovation programme (Grant agreement No. 694767)