Stegosaurus is one of the most easily recognizable dinosaurs, in part due to the plates and spikes on its back and tail. But their function remains a bit of a mystery — or so Susannah Maidment tells us.

music by Adam Selzer, Plus Plus and Chris Zabriskie 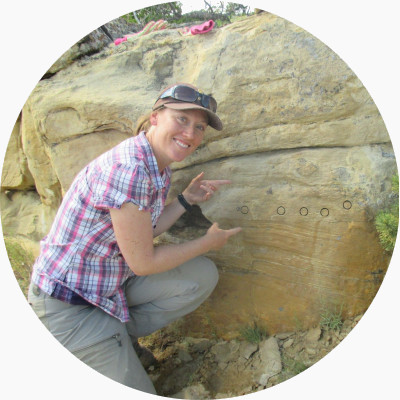 Susannah is a Junior Research Fellow at Imperial College London, where she uses geology to examine patterns of dinosaur diversity. When not fiddling about with stegosaurs, she spends her time taming a toddler and mountain biking, with variable success in each case, and not necessarily at the same time.

Hands up who knows what Stegosaurus is? Pretty much every 7 year old in the world can tell you that Stegosaurus was a plant-eating dinosaur which walked on four legs, and possessed two rows of bony plates and spines that extended down its back from its neck right to the end of its tail. But what fewer people know is that, despite being one of the most iconic dinosaurs, stegosaur fossils are actually really rare — and that causes lots of problems if we want to understand how they lived, and what they were doing with those bony plates and spines.

Stegosaurs lived in a time period called the Late Jurassic, from about 165 to 145 million years ago. The first dinosaurs evolved about 235 million years ago, and the last dinosaurs — if we exclude the birds — went extinct at the end of the Cretaceous, 66 million years ago. That means the dinosaurs ruled the Earth for 170 million years! But that’s not all: it also means that Stegosaurus was already a fossil by the end of the Cretaceous when T. rex was alive, and that T. rex is closer to us in time than it was to Stegosaurus. Stegosaur fossils have been found on all continents except Australia and Antarctica, suggesting that, while they may have been rare, they were widespread.

So that’s some of the things the fossil record tells us about the stegosaurs. But what was the function of the two rows of bony plates and spines on their backs? What were they for? Understanding what the plates and spines were for could help us to understand a lot more about the lives of these animals — whether they were warm blooded or cold blooded, whether they were social animals or lived individually. A few leading theories have thus been suggested.

One theory is that the rows of plates and spines were for defence. Any large, meat-eating dinosaur attacking from above would receive a mouthful of spikes if it tried to attack a stegosaur. And the spikes at the end of the stegosaur’s tail could be swung to impale the leg of any predator daring enough to get too close.

What does the fossil record say about this? Well, there is a vertebra — a bone from the back — of the meat-eating dinosaur Allosaurus, likely Stegosaurus’ most fearsome predator. The vertebra has been punctured, and the bone has healed in a ring. Insert a Stegosaurus tail spike into the ring and it fits perfectly, perhaps suggesting the injury was inflicted by the back end of an angry stegosaur. Researchers have also calculated that the force at the end of a swinging stegosaur tail spike could impact into bone. But what of the plates on the back? These are much thinner, and it seems unlikely they could have withstood the force of an Allosaurus bite: for Allosaurus, munching on a Stegosaurus plate would probably have been like eating a pack of Pringles!

So what could explain why the plates of Stegosaurus evolved? According to another theory, they evolved to control body temperature. The dinosaurs were probably cold-blooded, so would have had to rely on some aspects of their environment to regulate their body temperature. The plates of Stegosaurus are very broad and thin. They are covered in blood vessel pits, suggesting the animal could have pumped blood into the plates, perhaps allowing it to cool down.

However, the plates of other stegosaurs, such as Kentrosaurus from Tanzania, or Chungkingosaurus from China, are much smaller than those of Stegosaurus, and they probably weren’t large enough to act as heat radiators. Stegosaurus might have used its plates to help it cool down, but it doesn’t seem like that’s why they evolved. It looks like we are running out of options…

But are we really? The final leading theory that has been suggested is that the plates and spikes were simply display structures: they were used to identify members of the same species, to make sure the animal was mating with its own kind, or perhaps they just made the stegosaur look larger and more fearsome than it actually was. Stegosaurs probably weren’t winning any running races, so they needed another way to deter predators. All of the different species of stegosaurs had different shaped plates and spikes, lending some credence to this theory.

It seems likely that all three of these theories might be right in one way or another. While stegosaur plates might not have been any good for defence, stegosaur tail spikes were probably fearsome weapons. Stegosaurus might have used its plates as heat radiators, even if they weren’t so useful for this in other stegosaurs. And they probably all used their plates to make them look larger or to attract the right mate. In the end, if we are to understand more about these fascinating, iconic animals, our search for more stegosaur fossils, especially ones that represent complete skeletons, cannot stop here: we need to keep digging deep.